What a Difference a Wall Makes ! (when it's gone !)

This is an illustrated story of how a 40+ year old tiny kitchen was transformed into an open-space﻿, modern kitchen / living space created by Jenalzoco, LLC. 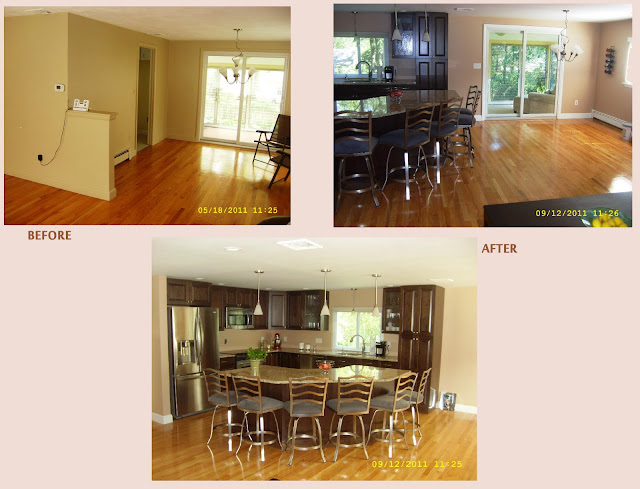 This load bearing wall enclosed a functional, but tiny kitchen.  The new owners of this home wanted a larger, brighter space.  Jenalzoco engineered the removal of the load bearing wall with the installment of a new beam in the floor of the attic and columns in the basement. The heating and electrical elements that had been in the wall were also relocated. 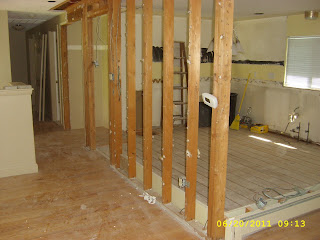 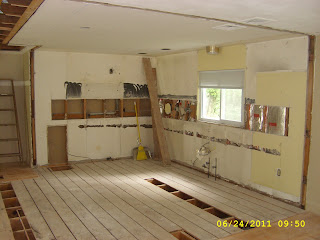 With the wall gone, the owners were able to envision their new kitchen and living area. They loved dark cabinets so they replaced the original painted cabinets with these raised panel dark walnut cabinets from Metropolitan Cabinet in Norwood, MA

The pendant lights installed over the island are a nice addition for intimacy.
The recessed lights around the kitchen are added to improve the area lighting. 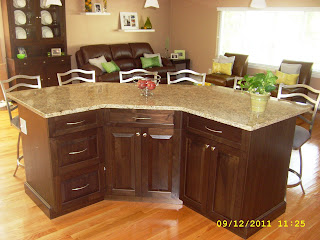 The space is opened up into functional and beautiful living area.
This kitchen is now the central station of real living for this family.
Jenalzoco - New Visions in Home Renovation Services
﻿
Click for more photos of this project
﻿
Posted by Jenalzoco at 7:45 AM 1 comments 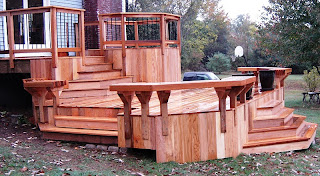 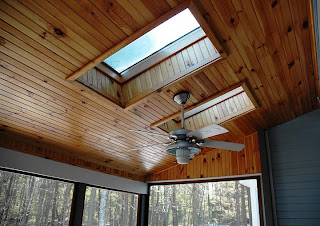 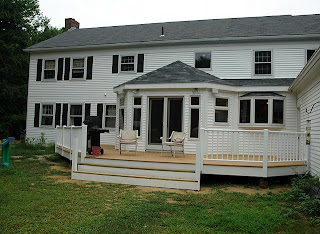 Call Mitch for Ideas !
508-400-0862    Mitch@Jenalzoco.com
Past, Present and Future: Thoughts, Photos and Visions of new surroundings.
Posted by Jenalzoco at 10:55 AM 0 comments

Now that we have a man-cave, my marriage is perfect!

We asked our Basement Makeover Family if it would be okay to use photos of their project in our blog....

Here is their response.....
I am busting up laughing over here at how atrocious our basement was !!!
No wonder I avoided it at all cost ! It gave me anxiety attacks 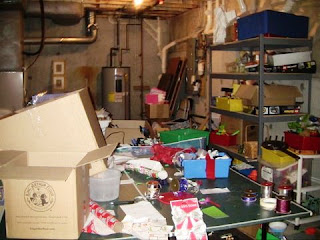 Use our photos! Use our name! I would gladly take calls, give references, whatever is needed. 'Our basement is the first update to our home that I feel that was really done RIGHT. From top to bottom. Mitch guided us, shared his expertise, and crafted a room for our family. Hands down the best experience I have had with in the construction field - from Mitch to each and every one of his workers.' (Thats a quote you are free to use!)

Seriously, you and your crew are hands down the best contractors I have ever worked with.... And I used to own a drywall company!


Now that we have a man-cave, my marriage is perfect! 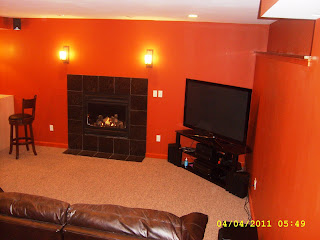 (Thanks, Kristi we are so happy that you and your family can enjoy your new space.)
Posted by Jenalzoco at 10:39 AM 0 comments

DO YOU SEE THE VISION THEY SAW? 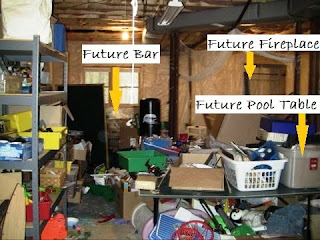 This active family wanted a fun, comfortable and versatile space for family and friends to 'hang out'. Their decision was to convert their cement basement into an 'entertainment haven'.
Not sure where to start, they called Mitch to get some ideas. They knew they wanted a pool table, TV/Video game area, a fireplace and a bar area. But how would it all fit in? 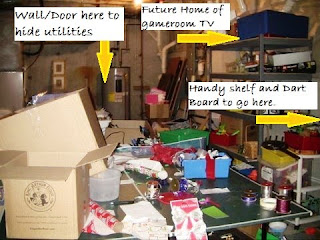 ARE YOU SEEING IT YET?
Well, of course there was a good amount of preparation prior to the finished room.
(don't skip to the ending yet.... let it be a surprise)

Where to put the bathroom? 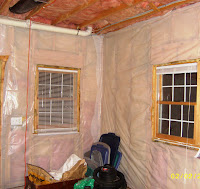 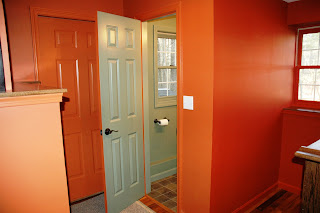 We wanted to hide the standard sewer ejection pipe that would be housed in the bathroom, so we created a custom-built enclosure. 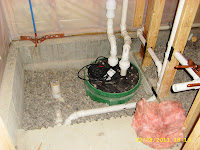 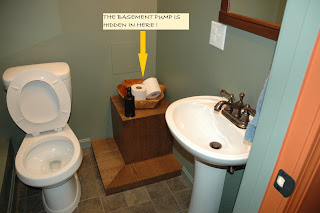 No Chimney?    No Problem !!
A propane fireplace/heater takes the place of the treadmill 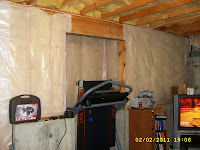 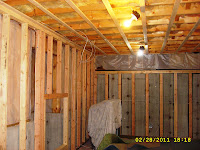 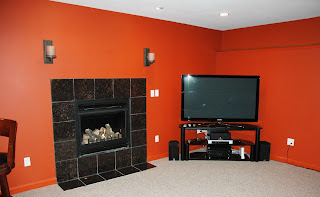 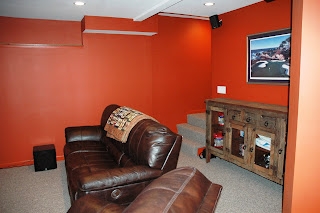 Look at how the stairway transformed..... 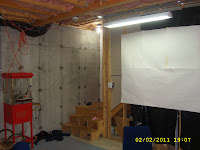 MORE VIEWS OF THE FINAL ROOM.... 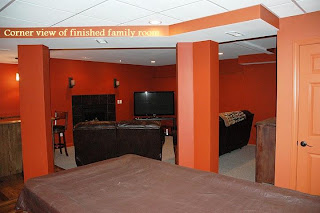 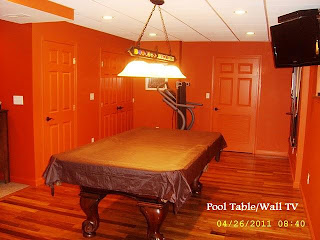 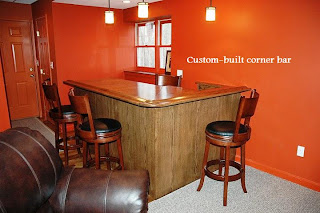 For more photos of the before/after views of this project, visit our online album
Transformations of a Cement Basement
Posted by Jenalzoco at 4:52 PM 0 comments

Transformations of an Ugly Kitchen

You may remember your kitchen from 1985: 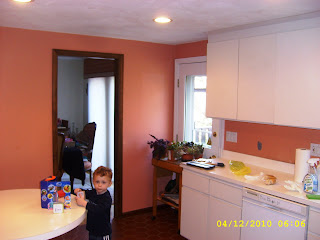 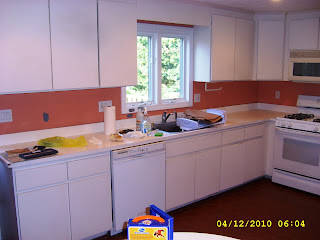 The Weintraub family remembered 1985 only too well.... their kitchen still had the cabinets, floors, counters and appliances from 1985 when the house was originally built. They were ready for new....new....new...

The Weintraubs are a family of 6. Mr. and Mrs. Weintraub, their daughter and her husband, and two grandchildren. They had some very real concerns:

Upon meeting with the Weintraubs, we discussed the proposed scheduling for their project. I outlined that the demolition process would take a couple of days. The alteration of walls, a new floor and the installation of the new cabinetry would take another 3 days. Granite countertops usually take a bit more time. They have to be templated, fabricated and then installed, which usually takes at least a week. During that time, the painting was completed, appliances were installed and finish electrical work was done. The Weintraubs were pleased to find out that things could move as quickly as that. 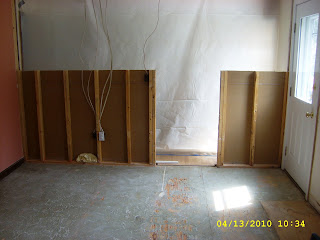 Mess ? What Mess? Plastic sheeting was hung up to separate the kitchen area from the rest of the house. Every single day, the debris from the construction is cleaned up, never left on site. This is just one more thing that I am a stickler about. My work areas absolutely must be cleaned up each and every day.

The professionals that I use to complete kitchen remodeling are the cream of the crop. They have been selected personally by me after a lengthy weeding out process of others who did not meet my strict criteria.

The Weintraubs hand selected all of the items for their new kitchen. Ceramic tile, appliances, cabinets, granite countertops, light fixtures and paint colors.... all of their choosing. Allowing the clients to choose all of their own details, puts them in control of the costs of their own project. The Weintraubs enjoyed the autonomy of the selection/pricing process.

The project was completed on time, on budget and with smiles all around. 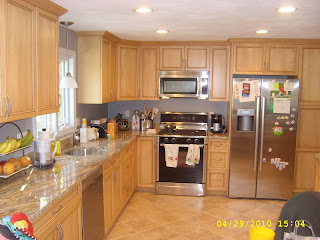 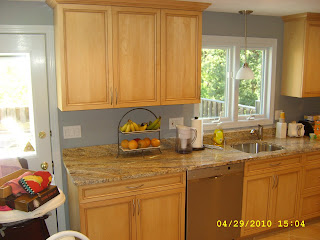 To see a slideshow progression of this kitchen's transformation:
Posted by Jenalzoco at 12:58 PM 1 comments

Ok, what I really like to do..... what I am really good at .....is NOT writing ! But the consultants tell us, we need to have a blog to be current, relevant and 'hip'. Really, 'hip' ? So here is my attempt at relevance.

First, a bit about myself. I have been in the construction industry for over 25 years, beginning with my studies in handcrafted antique reproduction at the North Bennet Street Industrial School of Boston. My first project, under Walter, the 80 year old master craftsman of NBSIS, was a toolbox, all hand-tooled, with dovetail joints, carved finger hods and draw-down front cover. Although covered with dust from storage in the Buttonwood Barn for over 15 years, the box still holds a great deal of meaning and a source of pride for me, as well as holding LOTS more tools than it did back in 1982 ! ( One of my philosophies is "He who dies with the most tools....WINS)


For me, having a vision, and bringing that vision to reality with only my imagination, my hands a few good tools is what makes me happy.

You can find more of my favorite projects on my website's photo gallery. (Click Here)

I have four kids: Jenna, Alex, Zoe and Colton. Take the first syllable of each name and you have Jenalzoco. Fifteen years ago, my wife, Susan and I purchased a hundred-year old farmhouse in which to raise our children. The house ..... and the kids....are a work in progress.

Thank you for checking with the musings of a versatile contractor. Please visit my website: http://www.jenalzoco.com/ for more information on my products and services. I look forward to using this blog space as a resource to let you know what we are up to next !

With visions of beautiful spaces, Mitch

Posted by Jenalzoco at 2:50 PM 1 comments

From Shoebox to Showcase 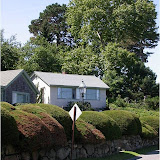 Click on the photo to link to a slideshow showing an impressive transformation from a tiny box-type home into a showcase- quality seaside residence.

"After consulting with an architect, I sent bids out to five separate contracting firms... The project presented many problems, the permitting process was arduous, and the site was extremely difficult. We were compelled to stay within the existing foot print, which limited construction options. Two of the (construction) bidders declined to take the job, citing "...too many obstacles to completion."
Mr. Finn cheerfully accepted the jog, brought in very capable subcontractors and manged the job seamlessly from start to finish"

Jenalzoco
Easton, MA, United States
I have a focus on visionary construction for residential and commercial applications. I place the utmost emphasis on communication. Communication is a vital ingredient for integrity. Integrity is the basis for trust. Trust is the reason for choosing a construction professional. Trust that the materials are quality. Trust that the workmanship is unmatched. Trust that you will appreciate the value of your project.